Unless otherwise noted, changes described below apply to the newest Chrome beta channel release for Android, Chrome OS, Linux, macOS, and Windows. Learn more about the features listed here through the provided links or from the list on ChromeStatus.com. Chrome 81 is beta as of February 13, 2020.

NFC stands for Near Field Communications, a short-range wireless technology for transmitting small amounts of data, usually between a specialized NFC device and a reader. If you’ve scanned a badge to enter a building, you may have used used NFC.

A demonstration of Web NFC cards

Reading and writing are simple operations. You’ll need a little instruction for constructing and interpreting payloads, but it’s not complicated. Fortunately, we have an article, Interact with NFC devices on the web. Check it out. A few code samples are shown below.

Writing a string to an NFC tag:

Chrome 81 introduces the mobile web to NFC with an origin trial. See the Origin Trials section for information on signing up and for a list of other origin trials starting in this release. 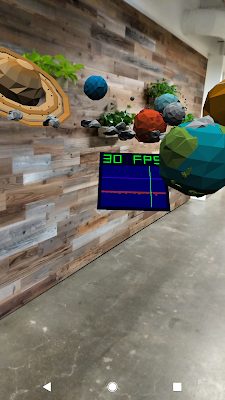 If you’ve already used the new API to create virtual reality, you’ll be happy to know there’s very little new to learn to use AR. This is because the spec was designed with the spectrum of immersive experiences in mind. Regardless of the degree of augmentation or virtualization, the application flow is the same. The differences are merely a matter of setting and requesting different properties during object creation. 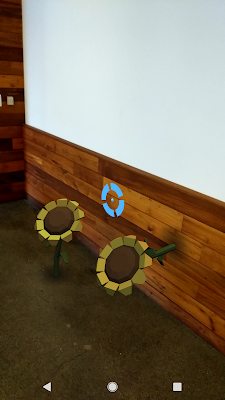 The WebXR Hit Test API provides a means for an immersive experience to interact with the real world. Specifically, it enables you to place virtual objects on real-world points in a camera view. The image below from one of the Immersive Web Working Group’s sample apps illustrates this. The broken blue circle indicates a point returned from the hit test API. If I tap the screen a sunflower will be placed there. The new API captures both the location of a hit test and the orientation of the point that was detected. You’ll notice in the image a sunflower has been placed on both the floor and the wall.

Scripts now have the ability to request unadjusted and unaccelerated mouse movement data when in PointerLock. If unadjustedMovement is set to true, then pointer movements will not be affected by the underlying platform modifications such as mouse acceleration.


Other features in this release

Chrome is now auto-upgrading images served over HTTP from HTTPS sites by rewriting URLs to HTTPS without falling back to HTTP when secure content is not available. Chrome has been auto-upgrading audio and video content since version 80.

A new meta tag and CSS property lets sites opt-in to following the preferred color scheme when rendering UI elements such as default colors of form controls and scrollbars as well as the used values of the CSS system colors. For Chrome 81 only initial color and background are affected.

Implicit tracks are now excluded from the resolved values of the grid-template-rows and grid-template-columns. Previously, all tracks were included, whether implicit or explicit.

The HTMLAnchorElement now has an hrefTranslate attribute, providing the ability for a page to hint to a user agent’s translation engine that the destination site of an href should be translated if followed.

In version 81, Chrome modernizes the appearance of form controls on Windows, ChromeOS, and Linux while improving their accessibility and touch support. (Mac and Android support are coming soon.) It’s hoped that this will reduce the need to build custom form controls. This change is the result of collaboration between Microsoft and Google. For more information, see the recent talk at CDS or the MS blog post. For a closer look at the controls, this page gives an example of all of the elements that changed.

Until now, the prefixed onwebkit{animation,transition}XX handlers were only available on the Window object in Chrome. They are now on HTMLElement and Document as required by the spec. This fix brings Chrome in line with Gecko and Webkit.

Note: This change is intended to improve interoperability on existing web pages. These handlers are still obsolete so web developers should use the non-refixed versions on new pages.

Adds support for tracking position state in a media session. The position state is a combination of the playback rate, duration, and current playback time. This can then be used by browsers to display position in the UI and with the addition of seeking can support seeking/scrubbing too. For a code sample and demonstration, see our sample. 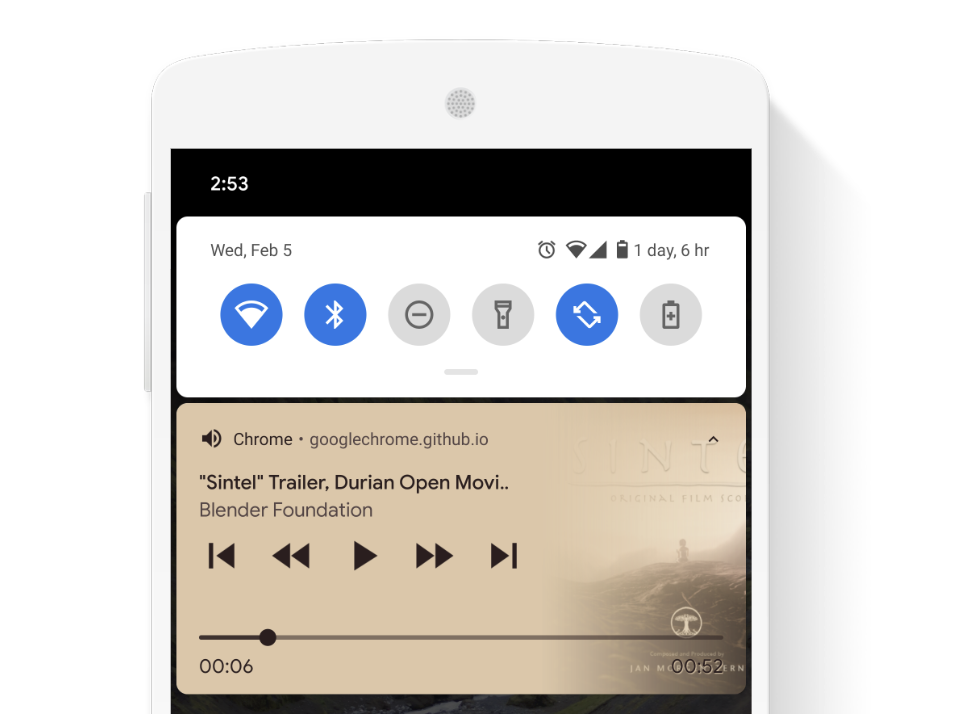 Currently, applications are doing their own form submission by calling preventDefault() during onsubmit. This approach has the limitation that the received event does not include the button that triggered the submission.

This release also extends ConvolverNode capabilities slightly to allow developers to choose the desired behavior without having to add a GainNode to do the desired mixing.

The candidateerror event now has an explicit address and port, replacing hostCandidate.

Adds the onclosing event to the RTCDataChannel object, which signals to the user of a data channel that the other side has started closing the channel. The user agent will continue reading from the queue (if it contains anything) until the queue is empty, but no more data can be sent.

Adds the WorkerOptions object as the second argument for a shared worker constructor. The previous second argument, a string containing the worker’s name is still supported.

WritableStream objects now have a close() method that closes a stream if it is unlocked. This is directly equivalent to getting a writer, using the writer to close the stream, and then unlocking it again.

This version of Chrome incorporates version 8.1 of the V8 JavaScript engine. It specifically includes the changes listed below. You can find a complete list of recent changes in the V8 release notes.

The Intl.DisplayNames() object lets an app or script get localized names of language, script, currency codes, and commonly used names of date fields and symbols. This will reduce the size of apps (thereby improving latency), make it easier to build internationalized UI components, reduce translation costs, and provide more consistent translations across the web.

Specifying “supportedTypes”:[type] parameter for “basic-card” payment method shows cards of only the requested type, which is one of “credit”, “debit”, or “prepaid”.

The card type parameter has been removed from the spec and is now removed from Chrome, because of the difficulty of accurate card type determination. Merchants today must check card type with their PSP, because they cannot trust the card type filter in the browser:

Chrome 81 removes the <discard> element. It is only implemented in Chromium, and is thus not possible to use interoperably. For most use cases it can be replaced with a combination of animation of the ‘display’ property and a removal (JavaScript) callback/event handler.

This version of Chrome removes TLS 1.0 and TLS 1.1. TLS (Transport Layer Security) is the protocol which secures HTTPS. It has a long history stretching back to the nearly twenty-year-old TLS 1.0 and its even older predecessor, SSL. Both TLS 1.0 and 1.1 have a number of weaknesses.

Supporting TLS 1.2 is a prerequisite to avoiding the above problems. The TLS working group has deprecated TLS 1.0 and 1.1. Chrome deprecated these features in version 72 in early 2019.

TLS 1.3 includes a backwards-compatible hardening measure to strengthen downgrade protections. However, when we shipped TLS 1.3 last year, we had to partially disable this measure due to incompatibilities with some non-compliant TLS-terminating proxies. Chrome currently implements the hardening measure for certificates which chain up to known roots, but allows a bypass for certificates chaining up to unknown roots. We intend to enable it for all connections.

Downgrade protection mitigates the security impact of the various legacy options we retain for compatibility. This means user’s connections are more secure and, when security vulnerabilities are discovered, it is less of a scramble to respond to them. (That, in turn, means fewer broken sites for users down the road.) This also aligns with RFC 8446.